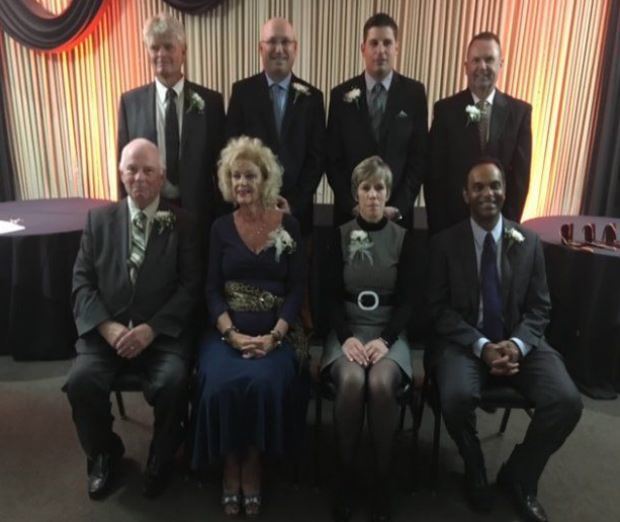 Bonnie Hammack Pentecost – Class of 1961
After earning her Master’s degree in Learning Disabilities from Wright State University, Bonnie focused her energies on working with individuals who are disadvantaged or socially exiled. She has worked alongside the Methodist Church through the Community Partners Association which is dedicated to establishing and supporting schools and religious study in the Dominican Republic.

Warner Keith Taiclet – Class of 1962
With a Masters of Education degree from Westminster College, Warner taught in Windham Schools, serving as the President of the Teachers’ Association. His service to the Howland Community includes the Howland Local Schools Board of Education; the Township Park & Recreation Planning Commission; the Howland Athletic Club; and the Howland Historical Society where he serves as President.

Beth Schneider Brainard – Class of 1971
After attending both Kent State University and Harvard University, Beth started her own public relations business, growing her company into a successful firm with major clients which included, among others, the Walt Disney Co. She wrote the children’s books Soup Should Be Seen, Not Heard! and YouCan’t Sell Your Brother at the Garage Sale selling 200,000 copies.

David E. Tewksbary – Class of 1977
David is an inventor who has at least eight patents. He completed his graduate studies at Massachusetts Institute of Technology and developed software applications for the first generation of personal computers. Dave has written over one million lines of code and is currently Chief Technology Officer and Vice President at Dassault Systèmes.

Kyle Dzapo – Class of 1979
With a Master’s Degree in flute performance from the New England Conservatory of Music, and a Doctor of Music degree from Northwestern University, Dr. Dzapo joined the faculty at Bradley University in Peoria, Illinois. She serves as principal flutist of the Peoria Symphony Orchestra and has given solo recitals in New York, London, and Denmark. She was also a soloist at the International Flute Festival in Cannes, France.

Thomas J. Wilson – Class of 1986
Dr. Wilson graduated from Case Western Reserve University in 1990 with a Bachelor of Science Degree in Biology. He earned his Doctor of Dental Surgery degree from Case and today operates a dental practice in Howland. His work has taken him to the Petan Jungle in Guatemala and he frequently provides reduced-cost dental care for families in need.

Thomas E. Hutson – Class of 1988
After receiving his Bachelor’s degree in Pharmacy from Ohio Northern University, Dr. Hutson obtained his Doctor of Osteopathic Medicine degree from Ohio University. He is the director of the Genitourinary Oncology Program and Co-Director of Oncology at Baylor University as well as a Professor of Medicine at Texas A&M. Tom is a leader in the field of Urologic Cancers who focusses on improving outcomes using novel and targeted agents.

Sunil V. Rao – Class of 1988
After graduating from the Ohio State University’s College of Medicine, Dr. Rao trained in Cardiovascular Medicine at Duke University Medical Center. He is currently an Associate Professor of Medicine at Duke and is Chief of Cardiology at the Durham Veterans Affairs Medical Center. He is a Fellow of the American College of Cardiology and is the author or co-author of over 200 journal articles.

Arvind Manocha – Class of 1990
After graduating from Cornell University, Arvind received his Master’s Degree from the University of Cambridge in England. He was the Director of Strategic Operations for the Walt Disney Concert Hall and served as the Vice President and General Manager of the Hollywood Bowl. Arvind is currently President and CEO of Wolf Trap Foundation for the Performing Arts, the summer home of the National Symphony Orchestra.

Anthony V. Spano – Class of 1998
Mr. Spano founded the Hope Foundation of the Mahoning Valley which raises money for chronically or terminally ill children. He also started “DreamCatchers for Kids”, a group that grants wishes for children with life-threatening medical conditions. In addition, he assisted Senator Joe Schiavoni in passing a bill in the State of Ohio creating ‘It’s ALL for the KIDS Awareness Day’.