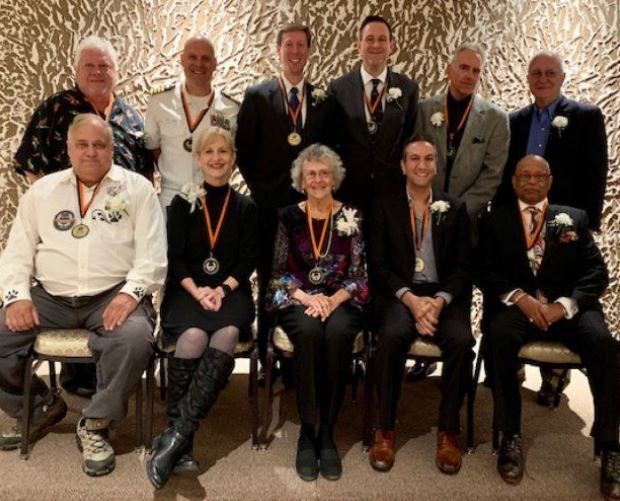 Barbara A. Wright – Howland Teacher and Administrator
After a 36-year career in education including 17 years as a principal at Howland, Mrs. Wright has served the schools as a member of the Howland Local Schools Board of Education since 2003. With Masters degrees in Administration and Gifted Education as well as numerous awards and a life of unending volunteerism, Barb has been a champion for our schools and the entire community.

Luther Blackwell, Jr. – Class of 1960
Through his ministry, Mega Church in Cleveland, Bishop Blackwell is well known for bringing people together. With Masters and Doctoral Degrees as well as a Doctor of Ministry degree, his efforts have expanded in the Hispanic nations of the world, producing a marriage of the two cultures. The author of three books, he also serves as pastor, with his wife, of a Christian Assembly in St. Louis.

Jay L. Toth – Class of 1972
With degrees in anthropology, history, and health from Youngstown State, the University of Cincinnati, and the University of Pittsburgh, Jay has focused his work on tribal health and archaeology. He has operated facilities in Ohio, Wyoming, Montana, and Alaska. His accomplishments include the restoration of Indian mounds; the development of the Medicare Act of 1989; and consulting to Russian scientists to help resolve oil spills.

Mariano Longo – Class of 1973
With over 45 years of experience in the music industry, Mariano Longo has achieved success as a performer, arranger, conductor, artist, and producer. Longo has worked in television, theaters, nightclubs and casino showrooms. He has created orchestrations, played piano, or conducted for, among others, Gary Puckett, Air Supply, The Drifters, The Shangri-Las, Little Anthony & The Imperials, The Shirelles, and Wayne Newton.

Tommy McCoy – Class of 1973
McCoy formed a band which opened for Glass Harp and the James Gang. He has recorded albums with Gregg Allman’s band members, Stevie Ray Vaughn’s rhythm section, as well as on his own and has performed in Greece, Norway, Germany, England and Wales. His invention – Microphome – is a microphone disinfectant and deodorizer sold all over the world. McCoy donated a complete recording studio to our high school.

Beth Wright Giller – Class of 1979
With degrees from the University of Virginia and Duke Divinity School, Beth Wright Giller was endorsed and ordained as a pastor in the Evangelical Lutheran Church. Her congregation in Toledo is a thriving ministry offering service to those in need. In addition, Beth has performed and, more importantly, has directed between 60 and 100 performers in numerous productions in the Oregon, Ohio community theater.

Brian Selden – Class of 1988
After receiving his undergraduate degree from Princeton, Brian continued to law school at the University of Michigan. Mr. Selden is the current Partner in Charge of Jones Day’s Palo Alto office where he represents technology and industrial companies in software licensing and other disputes, often involving their most important intellectual property. He is a regular speaker on subjects including information security, legal ethics, and electronic discovery.

Brad Abruzzi – Class of 1991
Mr. Abruzzi received degrees from Princeton and New York University before his Juris Doctorate from Harvard where he served as an Executive Editor on the Harvard Law Review. He has worked as an attorney at both Harvard and MIT in civil rights litigation, free speech controversies, intellectual property litigation, online learning initiatives, and funded research. He also acts as Harvard’s principal attorney on immigration law and policy matters.

Jason Warner – Class of 1991
After receiving degrees from Westminster College, the Naval Postgraduate School, the University of Virginia, the University of North Carolina, and Stanford, Warner received numerous decorations and awards from the Navy. His Naval duties have included sea, shore, and joint assignments on, among others, the USS Enterprise and the USS Mesa Verde. He served as both a chief and a commander supporting operation ENDURING FREEDOM as well as IRAQI FREEDOM.

Stephen J. Potashnik – Class of 1993
With degrees in physics from John Carroll and the University of Notre Dame, Stephen earned a Ph.D. in low temperature physics from Pennsylvania State University. Working with the Office of Naval Research, he helped craft the quantum science strategy for the Department of Defense. He has also hosted a National Remote Atmospheric workshop with NASA and is the author of seventeen journal publications.

Donny Mehrabi – Class of 1995
Named a Top Doctor in Los Angeles and Beverly Hills, Dr. Mehrabi graduated from Kent State University and the Northeastern Ohio Medical University. Completing his three-year dermatology training at the University of Texas Southwestern Medical Center in Dallas, he operates his medical and cosmetic dermatology practice from multiple locations and has developed his own line of skin care products.